The technology underpinning cryptocurrencies – the blockchain, of course, is a decentralized ledger. There’s no central authority to validate cryptocurrency transactions. It’s why cryptocurrencies such as Bitcoin, rely on consensus mechanisms such as Proof of Work (PoW), to operate securely and efficiently. It’s what Bitcoin mining owes its existence to.

But the process requires a great deal of computational power. As a result, Bitcoin mining consumes about 61 TWh of energy annually, while also needing specialized, expensive hardware. So it’s not surprising that the need for a less energy-intensive system, with fewer barriers to entry, has been felt for a while. Staking is by far the most popular alternative to the PoW model. Sunny King and Scott Nadal first introduced the Proof of Stake concept, on which Staking is based, in 2012 to solve the challenge of high energy consumption in Bitcoin mining.

What Is Proof of Stake?

Proof of Stake is a consensus mechanism, where a participant in a network can validate block transactions, not based on their hardware capabilities, but on the number of coins they hold. In a PoS blockchain, participants enter into a contract to lock their coin holdings in a wallet. These locked coins are called the stake.

Every time a transaction is to be validated, the PoS protocol generates new units of the cryptocurrency. It then randomly assigns the right to validate the block on the ledger to one of these stakes. Since this selection happens randomly (but is generally proportional to the number of coins held), a user with a larger number of coins has a larger probability of getting selected.

So, unlike in Proof of Work, where hardware performance enabled users to create blocks, in a PoS system, it is the number of coins locked away that matter. Any malicious action is also fraught with serious consequences – bad actors can lose up to their stake. More on this, below.

How do PoS Rewards Work?

Being selected by the algorithm refers to being eligible to receive newly minted cryptocurrencies as a reward. Consider it compensation for helping secure the network. Rewards depend on the probability of a stake being selected, which in turn depends on:

Such an arrangement has led to a staking ecosystem that allows investors to generate passive income. The process is not difficult at all. A user needs to deposit their coins into a staking balance offered by a trusted source (more on that, below), and simply earn a certain amount of passive income per year for holding the coins.

Already, 50% of all eligible funds are estimated to be staked. According to a study, if this sort of adoption continues, we should see upwards of $19 billion locked as stake sometime in 2020 – a YoY growth of 271 percent. As of July 2020, we’re already past $12 billion. The chart below shows the fluctuations and market growth in staking in the past year. 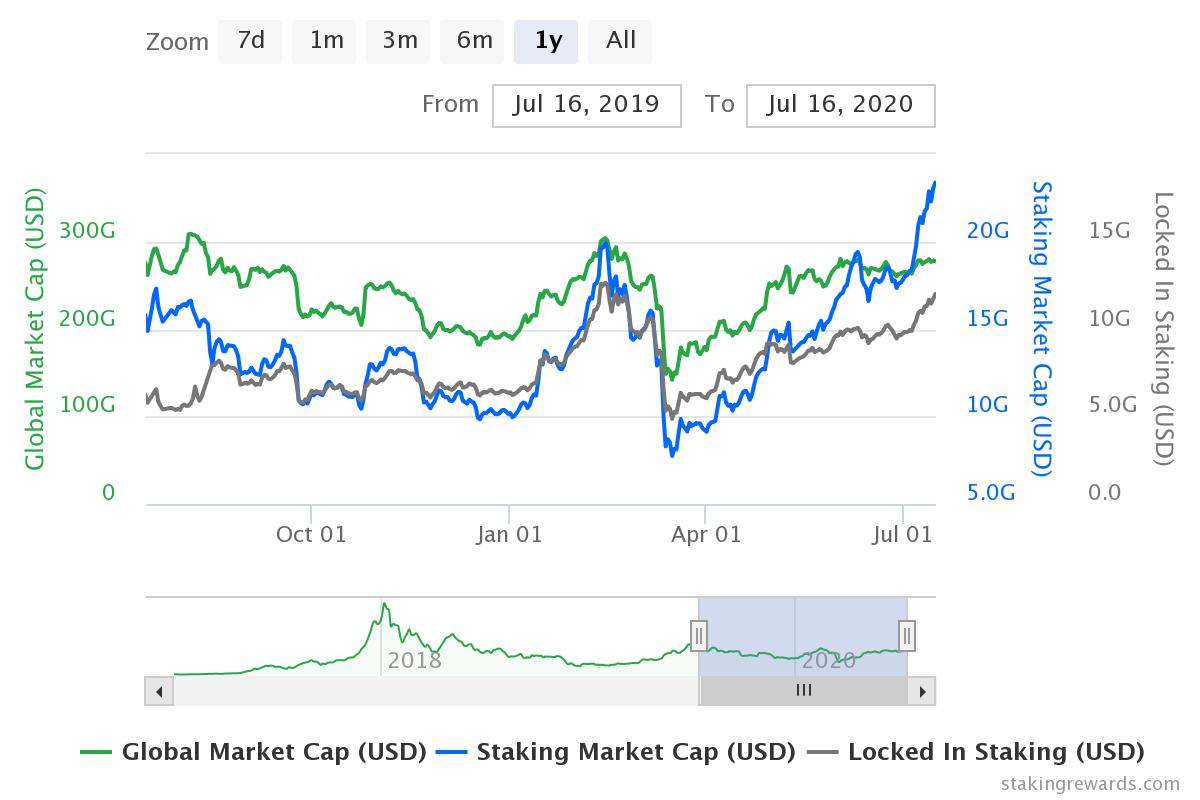 The market was relatively quick to begin recovering from a slump that appears to be at least partly due to the global pandemic. PoS popularity has only grown undeterred, however. Even Ethereum – the second-largest cryptocurrency by market capitalization – is expected to migrate to Proof of Stake from Proof of Work.

PoS also makes attacks on the blockchain more expensive. Nodes stand to lose out on possibly their entire stake if they attempt to engage in fraud, such as double validation. They also risk losing their stake if they go offline for prolonged periods. This is referred to as slashing risk, and should also encourage more people to see cryptocurrency-based investments as viable options.

Worth noting though – this doesn’t mean that staking is inherently safer than mining. While mining protocols do have the risk of a 51% attack, PoS protocols have their own set of vulnerabilities. These are the risks of centralization with more tokens issued to bigger stakers, or the risk of stakers colluding to overtake networks.

Staking doesn’t just offer an opportunity to generate passive income. It is also useful for those who want to participate in the consensus and governance of blockchains.

The Decred blockchain has implemented a hybrid approach to validating its transactions. It uses both PoW and PoS to lower the risks of mining centralization, owing to a sort of ‘balance of powers’ between the miners and the stakeholders. It offers a reward of 8-11% with no slashing risk. The cryptocurrency has a large ecosystem and even had one of the biggest voter turnovers. With its formal and binding governance model implemented off-chain using Politeia, Decred lets stakeholders vote and decide on important topics, changes in the protocol and treasury allocation in a way that is a hybrid of corporate governance and weighted voting. It’s an innovative model deserving of support.

Using a different, delegated-PoS approach, the Tezos (XTZ) blockchain, operating with the objective of accelerating adoption of futarchy governance, offers 5-8% returns per annum. Again, with no slashing risk.

Tezos calls the signing of the blockchain baking, and establishes eligibility for delegates (with baking privileges) using threshold XTZ balances. Tezos clarifies that “delegation is non-custodial, delegates cannot spend [participant’s] money (XTZs), and [the] stake is never at risk.”

Staking as a Service

With PoS quickly gaining in popularity and adoption, we now have a fairly vibrant staking ecosystem that’s constantly creating value, incentivizing innovation, and furthering the evolution of the crypto sector. The staking ecosystem primarily consists of:

Staking services, since they promote participation amongst token holders and support networks in their launch and growth, play a crucial role in the ecosystem. The rise of Staking as a Service – where an institution stakes funds on behalf of users and passes on the rewards, is a hit in the crypto community. It protects participants from risk while offering returns on what were otherwise idle assets generating no returns. Particularly in a bear market.

Both staking services, and the token holders, recognize the need for rich insights, data, alerts, and more as they engage in staking. Data plays a vital role in decision making for crypto investment funds, crypto investors, crypto foundations, PoS validators, and staking pools. A reliable source for calculations and visualization can assist individuals and businesses in making superior decisions. It can also help to generate higher returns in a market that has a tremendous potential to grow.

Crypkit has assisted several entities – funds, validators, pools, and investors – in keeping a real-time eye on their Staking activities. Its services are ideal for, say, when you are an institution, and lack dedicated resources or when the network has slashing risk.

Crypkit, a leading toolkit for crypto-powered businesses, is set to launch a Staking Monitor for the PoS community. The Staking Monitor will ship with a range of features to enable a complete overview of a user’s staked funds, including:

All of this, on an advanced, user-friendly dashboard.

In addition to supporting Decred on its platform, Crypkit also supports Tezos and Cosmos (ATOM) addresses natively, together with staking monitoring functionality. Stakeholders enjoy unprecedented access to information and insights on their funds, with advanced filters, portfolio dashboards, and analytics. In the near future, we’re increasing focus on adding other Tendermint-based PoS blockchains, as well Polkadot and Substrate based chains. Exciting times!

While staking has some risks, having a good staking provider with the right toolkit can make staking so much easier and profitable.

Any cookies that may not be particularly necessary for the website to function and is used specifically to collect user personal data via analytics, ads, other embedded contents are termed as non-necessary cookies. It is mandatory to procure user consent prior to running these cookies on your website.